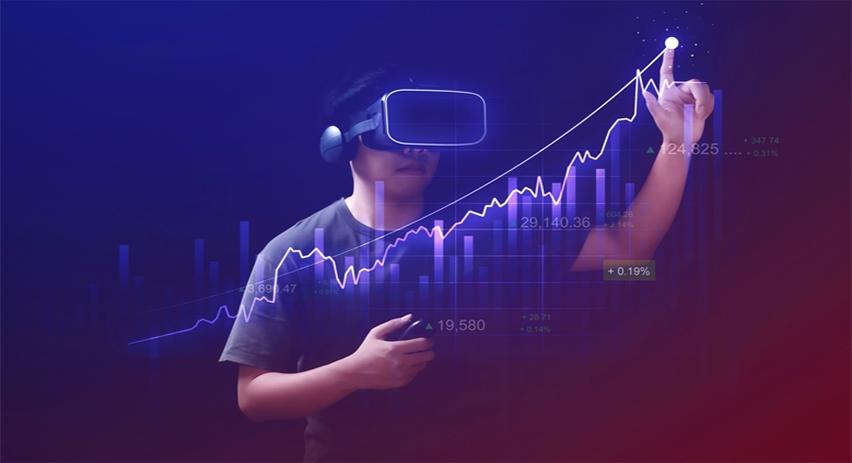 The advent of technology has created new industries and transformed our daily lives in a previously unthought manner. The transistor, which represents the basic block of computing, has been shrunk to microscopic dimensions, resulting in a vast growth of computing power that has enabled new technologies to take root. Additionally, advances in manufacturing technology have enabled companies to design, build, and produce gadgets that would seem like science fiction to humans living just a century ago.

Two such technologies are augmented and virtual realities, both of which serve to expand the way an ordinary user can interact with others and with technology products. Some use cases for AR and VR include video games and simulations, with both allowing users to immerse themselves in a virtual technological environment.

Another use case for AR and VR headsets is what is dubbed as a metaverse. A metaverse, for the uninitiated, is a three-dimensional virtual online environment that allows users to ‘enter’ a fully virtual social network to ‘live’ their lives in it. Derived from a combination of ‘meta’ and universe’, a metaverse also includes virtual interaction with physical objects and digital transactions.

Despite being only recently popularized, the metaverse industry is believed to be on a strong growth trajectory by several research firms. For instance, a recent report from Reports and Data outlined that the metaverse industry is set to grow at a compound annual growth rate (CAGR) of 44.1% between 2021 and 2028 to stand at a whopping $872 billion at the end of the forecast period. Another report, this time from Brandessence Market Research, outlined a similar CAGR of 44.8% to project a value of $596 billion by the end of 2027.

Owing to these optimistic projections and its nascent nature, large and small players in the broader technology space have their eyes set on the metaverse industry. Some of the big players that are developing products to either allow users the metaverse experience or create products that enable the vast amount of computing power required to create the virtual extension of physical reality are NVIDIA Corporation (NASDAQ:NVDA), Meta Platforms, Inc. (NASDAQ:FB), and Microsoft Corporation (NASDAQ:MSFT).

In order to determine which companies are hot in the metaverse sphere, we took a broad view of the enabling technologies required to fuel the sector. Once these companies were identified, we then analyzed them by taking a look at their earnings reports, investor letters, analyst coverage and hedge fund sentiment generated by Insider Monkey’s survey of 867 funds. The firms are ranked according to their hedge fund sentiment when available.

Tencent Holdings Limited (OTC:TCEHY) is a Chinese conglomerate that is described by many as one of the largest gaming companies in the world. It owns several gaming brands such as Epic Games, which has shot to fame due to its Fortnite application. Epic’s management has also hinted at developing virtual platforms for social events that would place users in a metaverse.

Tencent Holdings Limited (OTC:TCEHY) raked in RMB142 billion in revenue and RMB31.75 in net income for its fiscal fourth quarter, missing analyst estimates for both. Barclays set an $84 price target for the company in November 2021, outlining that Tencent Holdings Limited (OTC:TCEHY) will play a crucial part in China’s attempts to make its own internet.

Tencent Holdings Limited (OTC:TCEHY)’s largest investor is Prosux PRX who owns a 29% stake in the company. As of December 23, 2021, the company’s market capitalization stood at HK$ 4.4 trillion.

Unity Software Inc. (NYSE:U) is a company placed right at the heart of the metaverse, at least when it comes to enterprise and professional use. This is through its 3D platform that unites different application platforms to allow application developers to create only a single application and then make sure it is operable on a host of consumer electronics devices such as smartphones and computers.

In its third fiscal quarter, Unity Software Inc. (NYSE:U) earned $286 million in revenue and -$0.06 in non-GAAP EPS pleasing Wall Street by beating estimates for both. The company’s price target was increased to $185 from $160 in November 2021 by Credit Suisse, who shared strong optimism for its technologies.

Roblox Corporation (NYSE:RBLX) is another software company that provides a metaverse environment. The company is headquartered in California, United States and it develops both an application, Roblox Client, to allow users the metaverse experience, and a toolkit, Roblox Studio, to enable developers to create applications for the Client.

As its third fiscal quarter came to an end, Roblox Corporation (NYSE:RBLX) had earned $509 million in revenue and -$0.13 in GAAP EPS for its Q3, beating EPS analyst estimates for both. Needham set a $136 price target for the company in December 2021, outlining that despite the pandemic-induced growth in the gaming sector, Roblox Corporation’s (NYSE:RBLX) best days are yet to come.

Out of the 867 hedge funds Insider Monkey surveyed by Insider Monkey in Q3 2021, 50 had holdings in the company. Roblox Corporation’s (NYSE:RBLX) market capitalization at the close of trading on December 23, 2021, stood at $58.9 billion.

Roblox Corporation (NYSE:RBLX) was mentioned by Jefferies Group in its Q3 2021 investor letter. The letter outlined:

“If we look at the Metaverse concept with more lenient guidelines for interoperability, then it becomes easier to see why certain companies are being referred to as Metaverse. On the virtual side, we’d point to companies like Epic Games, TakeTwo and Roblox. In augmented reality, it would be Niantic and SNAP. These are the large capitalized players in the space but albeit, not the only ones. We expect new mulit-billion dollar companies will rise as the Metaverse becomes more mature.

Roblox is a good example. The content is almost entirely user generated, the engine that powers the developer studio is provided by Roblox and developers/creators share in almost all the money that users spend on the platform. In addition, many of the items that you purchase in the avatar marketplace, or even a branded experience like Vans World, can be taken across experiences. Roblox talks a lot about platform extension, which would move the platform beyond just gaming/leisure experiences and into education and workplace offerings. The developer community has the capability to build tools for other developers, there are professional studios being built on the platform and many consumer-facing brands/content are partnering with Roblox to ensure a virtual presence. Roblox actually has a lot of the pieces for our utopian definition of Metaverse, but things like technology, interoperability with outside platforms and a dynamic, two-way economy are what’s missing. However, given our thesis that full interoperability is somewhat unrealistic, it’s easy to see how Roblox fits the definition…” (Click here to see the full text)

Autodesk, Inc. (NASDAQ:ADSK) is one of the world’s most renowned software providers. It develops and sells 3D simulation software and other offerings to professionals working in several industries. Autodesk, Inc. (NASDAQ:ADSK)’s platforms allow the creation of detailed and complex virtual 3D structures and objects, which make it suitable to provide the tools to build a metaverse.

At the end of the third quarter of 2021, 54 out of 867 hedge funds part of Insider Monkey’s survey held Autodesk, Inc. (NASDAQ:ADSK) shares.

Autodesk, Inc. (NASDAQ:ADSK) earned $1 billion in revenue and $1.33 in non-GAAP EPS for its third fiscal quarter, beating analyst estimates for both. The company’s price target was lowered to $330 from $370 by Deutsche Bank in November 2021, due to weak guidance and supply chain constraints.

“Shares of Autodesk have lagged recently due to expectations of short-term headwinds to free cash flow as the company transitions its billing structure to annual payments from multi-year up-front subscription payments. We view this as a transient issue and believe Autodesk’s attractive long-term growth profile remains in place.”

QUALCOMM Incorporated (NASDAQ:QCOM) is an American technology firm that designs semiconductors for use in a wide variety of gadgets such as notebooks, smartphones, and Internet of Things (IoT) devices. When it comes to the metaverse, the company aims to be at the center of the digital universe by powering devices that allow users to enter the 3D environment. QUALCOMM Incorporated (NASDAQ:QCOM)’s semiconductor products, such as Snapdragon chipsets, run hardware like the Oculus Quest 2 virtual reality headset that is essential to access the metaverse.

QUALCOMM Incorporated (NASDAQ:QCOM) earned $9 billion in revenue and a non-GAAP EPS of $2.55 in its fiscal Q4, beating analyst estimates for both. Mizuho raised the company’s price target to $195 from $170 in November 2021, stating that the rollout of fifth-generation (5G) cellular technologies spells a positive catalyst for the company.

Alger mentioned QUALCOMM Incorporated (NASDAQ:QCOM) in its Q1 2021 investor letter, which outlined that:

“Long position Qualcomm Inc. were among the top detractors from performance. Qualcomm is a leading semiconductor company with strong positions in telecommunications end markets that position the company as a primary beneficiary of the innovative 5G network standard roll out. Qualcomm is acknowledged as having the best technology specs for 5G chip sets as evidenced by signing up all 75 major OEMs including Apple. Additionally, beyond handsets, Qualcomm has meaningful growth drivers, including the Internet of Things, automobiles, industrials and gaming that provide the company with potential for generating increased earnings.

While Qualcomm was a notable positive contributor to the portfolio’s absolute and relative returns in 2020, during the first quarter, the share price declined and the position detracted from performance. Market demand for chips has been strong; however, Qualcomm hasn’t been able to fully exploit the demand as it is capacity constrained. Expectations were high for Qualcomm and while the quarter generally exceeded consensus estimates and forward estimates did rise, the street was anticipating a stronger positive surprise. We believe the production capacity constraints should abate in the second half of this year.”